Buson and the Wife

I wanted to write this short piece to answer some points that came up on twitter the other day. A discussion broke out after I stated one of my favourite Buson haiku is:


the cold and I -  stepping on  my late wife’s comb


The main argument against the validity of this piece is anchored by the fact that not only was Buson’s wife still alive at the time of composition, but that she lived another 30 years after. This naturally develops into the argument of authenticity in haiku and how the haijin should write exclusively from experience. Now I’ve butchered the argument down to size here for the sake of brevity but I think the point comes across.
Firstly I kind of agree with this sentiment although I would encourage people to test and look at the limits of this ideology and the other principles of haiku. I’m not going to say what I think Buson was doing is right or wrong what I will say is that this poem hits me like a blow to the head and that to me is very real. That is a direct emotive experience. It feels no more real or nonreal than, for example, Issa’s dew drop poem, invoked by the loss of his daughter:


Personally I have reconciled certain feelings from direct experiences into others. For instance I feel homesick at least once a week, I’m hardly going to write directly on this experience over and over. But with this sense of longing I can, and do, express it in other ways. Not seeing my Father for six months at a time is sometimes like he has passed away or is sick. I grieve ever so slightly the way I do for people I have actually lost.
As readers we do this all the time. Buson’s ‘wife’ or Issa’s child are two experiences I have felt. And yet they strike me in relation to things I have felt rather than their direct experiences. The loss of a child or a wife is something that I’ve never felt but I have felt loss in other ways and this is how I transliterate this emotion. Would it honestly be that much of a crime for the haijin to do the same? 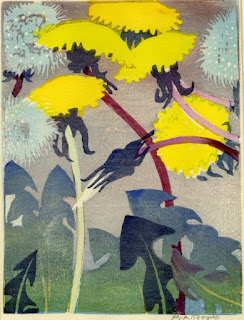 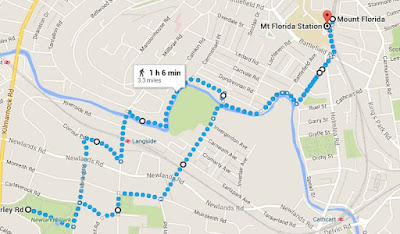 So here's something a little different for this blog. Seen as Spring is hitting its stride it's good to get out and walk. So here's a nice short one I like in Glasgow.
Exit the station onto Battlefield Road. Cross the road and follow Brisbane St all the way down to the White Cart Water. On the particular stretch I've repeatedly seen Kingfishers. Today I saw the resident Goosanders - 2 male.


Follow the river round till you come to a footbridge. On your right is the Weirs cricket Ground. Cross the footbridge and follow Kintore Road. Go under a railway bridge crossing over Newlands Rd. You'll meet a small green space with a play ground with crossing paths take either onto Monreith Road. Take a right and continue onto Langside Rd then take a left. Go passed the bowling green cross the road and take the first right onto Quadrant Road. Take the first right again on to Carlaverock Rd. At the end of the road you can see Newlands Park.
Right now the pond has frogspawn. Daffodils are in bloom. Cherry trees are pink. It's a small understated park. Take your time here if you want. Lots of benches and a relaxing atmosphere.
On the way back take a slightly different route that allows a little more time along the White Cart
In front of the Newlands church a cherry tree blooms. The contrast of pink blossom on sallow sandstone is quite striking. The river rambles on and a short stroll through a tenement street brings you back to Weir's bridge and you can follow the route back to the station

Posted by Michael O'Brien at 03:08 No comments: